Last week I went up to Oban with my pal Paul for a day of sea kayaking. It's something pretty new for me - I did a two day introductory course last year, loved it, and haven't been in a kayak since. 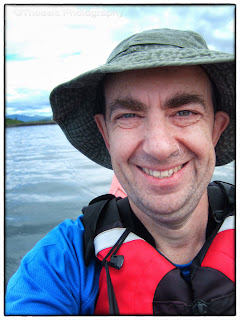 We'd booked a day with a chap by the name of Rowland Woollven (http://www.rwoollven.co.uk/), who seems to be a person of some note in the world of sea kayaking. In June he became only the 19th (?) person to paddle around the UK.
Mr Woollven was 30 years in the Army and the Royal Marines. And when he retired he bought a house a few metres from the water; he earns himself some “pocket money” by helping improve their kayaking skills. He’ll help experts, but fortunately for me he’ll also help complete novices. And for a man who leads expeditions in the wild seas of Alaska, he never once gave the impression that someone of my limited talent was below him or a poor use of his time. On the contrary, he was really encouraging, critical of what I did wrong, encouraging of what I did right (ok...what I did less-wrong!) and kept a watchful eye on my bad technique. 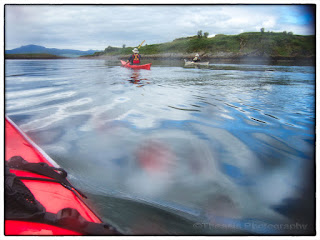 We set off from Ganavan Bay, just to the north of Oban, then headed south down the outside of Kerrera, back north through the Sound of Kerrera and back into Ganavan Bay. It's about 20 kilometres round trip and certainly further than my previous longest paddle. 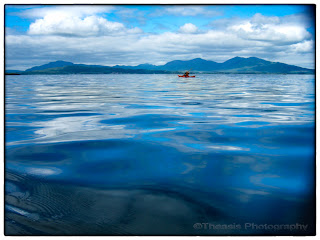 Kerrera is the island which sits between Oban and Mull and which protects the harbour from the excesses of the Atlantic. From the Oban side it's quite civilised - big houses, a marina and a pier for the ferry. Even a road! The other side of the island is another world, away from the sight of the mainland, away from the sight of tourists on the Mull ferry, hidden from civilised eyes, is a more raw land. The black basalt rock of ancient lava flows; here smooth and even, there twisted and broken where later Vulcan changed his mind and decided to rework what he'd wrought. Still further along, the too-neat-for-nature columns of a miniature Giant's Causeway (it's part of the same lava flow!) and excitingly a stony beach with all sizes of smooth, rounded rocks that had been covered and consumed in a fossilising flood of molten magma, then lifted up as the ice-age covering melted and Scotland rose up, floating on the denser rock below and bobbing up at a faster pace than the rising sea level. Like a lake of conglomerate, a texture which looked as unnatural as a bed of concrete. There's a real magic to places like this, which are so different to the familiar landscapes just a spit away on the civilised, settled side. The boats to Mull and other regular water traffic don’t come down this side, there are no safe landing points on this shore of the island, and the shallow reefs are probably quite a discouragement. There aren’t even the usual collection of buoys marking fishermen’s lobster pots. And walkers probably don’t see much of it either - why call at Kerrera when you could just go to Mull? So it’s a world for seabirds and paddlers.
There’s even a miniature Fingal’s Cave but on a much, much smaller scale - just long enough and wide enough to fit two kayaks side by side. For a novice it was exciting to paddle in and try to reverse out again. A small delight, maybe, but one of so many small delights. 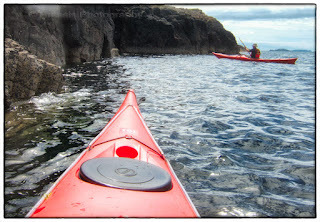 Walkers do go there. As we passed below the basalt cliffs we saw a young woman with a sketchpad walking. She sat and seemed to start drawing some of the rocks. From where we were it was really hard to see what might’ve got her interest. Then a little further on we saw a young man hanging on to the rocks, peering around corners, looking closely at the land and making marks on his own sketchpad. Ah! Geology field trip! When I briefly studied geology (1980-82 I think?) we managed a couple of field trips to the limestone areas of west Yorkshire. How much more exciting a trip to Kerrera would have been. And how I would’ve hated it in my timid awkwardness back then - travel isn’t just going to the right places...it’s got to be when you’re able to appreciate it. (I guess there’s a blog post about my wasted 3 weeks in Rome when I was 18 waiting to be written). 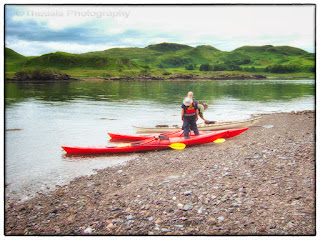 Paddling down the west coast of Kerrera, I started to find a comfortable rhythm. A steady pace, pretty calm seas, the front of the boat pointing for the most part in the direction I wanted it to point, watching the birds, the seals, the rocks, the animals on the shore. Left stroke...right stroke...left stroke...right stroke... A slow pace, no urgency, the world just being there. Like a seaward version of a walking meditation. You could right a lot of wrongs just by being there. Just by being. 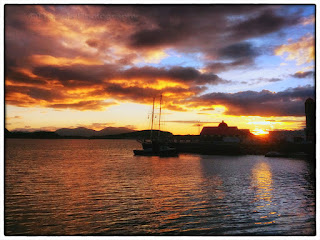